Garnets: A Rainbow of Colors

When you picture a garnet, a dark red stone probably comes to mind, but did you know that this January birthstone actually comes in a variety of colors? Whether red, orange, yellow, green, pink, purple, or colorless, garnets stand out from the crowd. Some garnets even change colors. 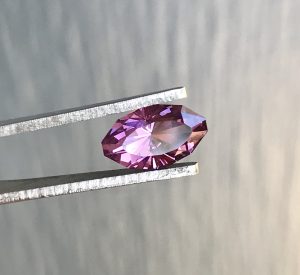 Red garnets have a long, rich history. Used for adornment in ancient Egypt and ancient Rome, they were also prized by clergy and nobility in the middle ages. In recent years more varieties have gained popularity, from the deep oranges of spessartine to the vivid greens of tsavorite and demantoid.

There are over twenty types of garnets, but only six species include gem quality stones. These species include: almandine, andradite, grossular, pyrope, spessartine, and uvarovite. Many garnets are actually combinations of two or more of these species.

One of our favorite garnets is a pyrope mined by ants in the Four Corners region of the U.S. You read that correctly. Known as “ant hill” garnets, the stones are brought to the surface by ants while creating their tunnels and discarding the “debris” on the sides of the hills.

As the gemstone of the second anniversary, it is fitting that garnets symbolize love, happiness, peace, and prosperity. As such, these versatile beauties are also an excellent choice for a unique engagement ring. With so many color options, you’re sure to find the one that is right for your special someone.

Contact us to get started on your custom garnet jewelry today!