Inspired by our previous support of The Allusionist (a podcast hosted by Helen Zaltzman highlighting the surprising history and etymology of words in the English language), we decided we’d take a closer look at some of the terms we use every day here at the studio.

When Dutch East India traders arrived in Sri Lanka (formerly known as Ceylon) at the beginning of the 18th century, they discovered several new types of gemstones that the local Tamil and Sinhalese miners called “Turmali” or “Thoramalli”, which is believed to be Sinhalese for “stone with mixed colors” and is now known as Tourmaline. The stone gained the nickname of “The Ceylonese Magnet” due to its ability to acquire an electrical charge, either by heating and then cooling an individual stone, or by rubbing it like a balloon. The stone would then attract dust or light paper through static electricity.

A Sapphire that Wasn’t

Today when we say “sapphire” we mean blue corundum, the second-hardest naturally occurring mineral. But as late as the Middle Ages, “sapphire” (or its Greek root sappheiros) was used to refer to any blue stone, most commonly Lapis Lazuli. In the Renaissance the name became applied to the gem we know today, at the time thought to be a cure for anger and stupidity.

History in a Name

Lapis Lazuli has been mined in Afghanistan for perhaps 9,000 years and appears on such artifacts as King Tut’s burial mask (where it is used for the eyebrows). Its name bears the distinction of combining roots from two different cultures and languages. Lapis means simply “a stone” in Latin, whereas Lazuli refers to the color and is the ancestor of the word “azure”. Lazuli itself comes from the Latin lazulum, which in turn derives from the Arabic lazuward which is a transliteration of the Persian lazavard which was both the name for the stone and the name of the place where it was originally mined.

Similarly, Turquoise got its name in the mid-sixteenth century when it began to be imported from a region of the Turkish Empire. It was given the Middle French name pierre turqueise for “Turkish Stone”, which has been simplified and modernized to the name we use today.

At first, Chalcedony seems to be another mineral that takes its name from the place where it was first mined, the Phoenician city of Chalcedon in Asia Minor. However this is an example of a false root, as “Chalcedon” means “new town” in Phoenician. More likely the name comes from the Green khalkedon, a word known from only one instance in all of literature in Revelations xxi:19.

A variety of Chalcedony that is tinted green by nickel is named Chrysoprase. The etymology of that name is straightforward, and humble: Chrysos, which is Greek for gold, and prasinon, Greek for the green color of Leeks.

Variscite and Malachite are two minerals with names that often cause confusion. Variscite is named for Variscia (now known as Vogtland) in Germany where it was first described in 1837. However it is often misspelled as “Veriscite”, a mistake encouraged by its green color.

Malachite’s name has no relation to the stem “mal”, or “bad” (though its dust, used for eyeshadow in ancient Egypt, is toxic if inhaled). Rather, this soft green mineral’s name comes from the Greek malachitis, or “Mallow Stone”, so called for its shared properties with the soft, green mallow plant. 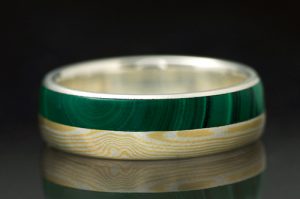 The word “Jeweler” itself can lead to incorrect conclusions. Despite the fact that Jewish families are well-represented in the modern diamond trade, the words “jeweler”, “jewel”, and “jewelry” have nothing to do with the words referring to the Jewish religion. Instead they come from the Anglo-French juel, possibly related to the Latin jocus or gaudium, for “joy” or “that which brings joy”.

It Came from Outer Space

Here at Christopher Taylor Timberlake Fine Art Jewelry we enjoy working with metal from iron-nickel meteorites (especially those showing a pronounced Widmanstätten Pattern). The word “meteorite” is not quite two hundred years old, coined in 1818 from “meteor” and “-ite”, a suffix indicating the source of something. Larger meteorites are often regmaglypted, or covered with regmaglypts which are thumbprint-like impressions caused by scouring of plasma vortexes as the meteorite passes through the atmosphere. Regmaglypt is composed of the Greek rhêgma, to fracture, and glyph, to carve, which comes from the Proto-Indo-European root gleubh.

Lastly, we all know that gems such as diamonds are “cut” to their final shapes. But in reality, there is very little cutting, as with a blade, in the process. Instead it is mainly grinding and polishing. So why do we say “cut”? Part of the reason is the many meanings that “cut” carries in the English language. In jewelry, “cutting” refers to the removal of unwanted material, and not the specific method of that removal. In fact, the cutting and faceting process can contain nine or more discrete steps.

We hope you’ve enjoyed our excursion through the etymology of jewelry. Make sure to get your regular dose of linguistic adventures with Helen Zaltzman on The Allusionist, and don’t forget to listen for the special discount code to save 10% off our jewelry!